During its six-month Presidency of the Council of the EU, the Czech Republic will focus on the following five key priorities: managing the refugee crisis and post-war reconstruction in Ukraine, energy security, strengthening European defence capabilities and cybersecurity, strategic resilience of the European economy and resilience of democratic institutions.

“These pillars encompass the long-term strategic interests and priorities of the Czech Republic. They are values that the Czech Republic has long upheld and of which it is proud. And these values are reflected in the priorities of our Presidency. Together with our European partners, we will strive during our six months at the helm of the European Union to be stronger together and to use our strength for the benefit of those who need it,” said Prime Minister Petr Fiala.

Prime Minister Fiala also recalled that this year marks 18 years since the Czech Republic joined the European Union. “On the first of July we will assume our historic second Presidency of the Council of the European Union. With a bit of exaggeration, we could call it a test of maturity. A test that will by no means be easy. Europe, and the whole world with it, is undergoing a fundamental change in wake of the Russian invasion of Ukraine shaking many of our certainties. It has certainly exposed the weaknesses of Europe’s security architecture, which we will have to grasp anew and actively develop, not as mere observers who rely on others,” he said.

The Prime Minister also recalled the extraordinary refugee wave triggered by the Russian aggression in Ukraine. “We must focus on the post-war reconstruction of Ukraine, make every effort achieve it and help Ukraine on its path to the European Union,” said Prime Minister Fiala. “However, the Russian aggression has also undermined the basic pillars of our economy. Energy security and supply chains, all at a time when we have literally just started to breathe again after the COVID-19 pandemic. As such, it puts the weakest among us to a cruel test. Therefore, it is our fundamental duty to ensure Europe’s strategic resilience in all these areas. For example, food security for all citizens should remain a certainty. [As should] availability of strategic materials and products, such as medicines and other items,” he noted.

“We can say that the world will not be the same after the Russian aggression in Ukraine. We want to play an active role in shaping it, because we have a unique chance and opportunity to write the future of Europe. However, our role will be different from that of the first Presidency, which took place before the Lisbon Treaty entered into force. Certain mechanisms of the European Union have changed and we are obviously aware of this,” the Prime Minister recalled. “Nevertheless, our role in leading the work of the individual ministerial councils will be crucial. We are aware of that too. The task of the Czech Presidency will be primarily to achieve consensus and European unity in individual areas, which is just so important” said Petr Fiala.

Prime Minister Fiala, together with the Minister for European Affairs Mikuláš Bek and the Head of the Office of the Government of the Czech Republic Jana Kotalíková, presented the Czech Presidency motto, logo and two versions of the promotional video to the public. The motto will be “Europe as a Task” and it is inspired by the 1996 essay of the same name by former Czechoslovak and Czech President Václav Havel, in which Havel reflected on the role of Europe in the then transformed world. “We are undoubtedly facing a profound transformation of the world similar to the one that took place at the beginning of the 1990s,” said Minister for European Affairs Mikuláš Bek. 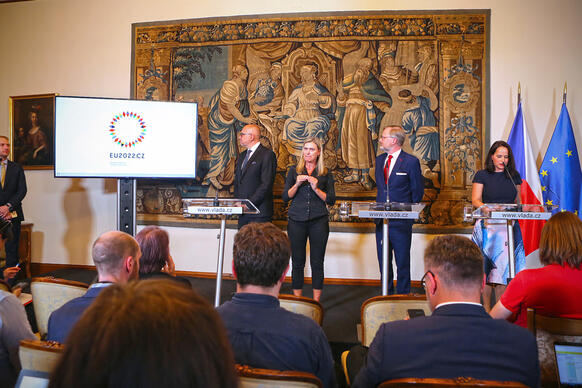